Natsuko No Sake & Kame No O

So, we know there are many different kinds of rice used in sake making called sakamai (酒米). Basically, these differ from regular table rice in that they are larger in grain and stalk size and have a higher starch content. Sake rice are all pretty much hybrids ie. varieties that have been cross-bred to create superior rice styles suitable for sake brewing-economically or practically.
But there are a few exceptions. Omachi is a fairly common rice that is a pure-bred variety. A rather distinctive rice that often has chestnut aromas and an earthy flavour. The other main pure bred rice is called Kame no O (亀の尾translates to Turtles Tail for what it’s worth. Comes from the appearance of the shoots).
Kame no O has been around for a very long time, at least since the 1800’s. It was used originally for eating as well as sake but fell out of favour to other cheaper, easier to grow economical rice. But it didn’t disappear completely. In 1980 the president of Niigata Prefecture brewery Kusumi, makers of Kiyoizumi, decided he wanted to brew a sake using the fabled Kame no O rice after hearing stories from his head brewer about how good it was ‘back in the day’. He obtained some seeds (a measly 1500 grains) from the Niigata Agricultural Research Centre and began cultivating Kame no O. What seemed liked a gamble at first, started to turn heads when in 1983 they released Kame no Okina Daiginjo. The rest of the sake world began to take notice and these days there are more than fifty breweries using Kame no O. They even had a Kame no O Summit in 2001 for all the brewers using Kame no O to get together and basically sing its praises.
Now, the Japanese love an underdog story, so in the land where there is a manga comic dedicated to just about anything and everything it probably wasn’t surprising when the Kusumi story of reviving Kame no O was adapted to a manga under the name “Natsuko No Sake” (Natsuko’s Sake). Not a particularly faithful reproduction of the story, it tells the tale 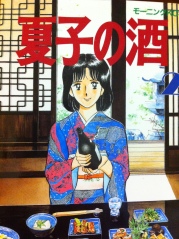 of a young copy writer named Natsuko who returns to the family business of sake brewing and against all odds follows the dream of her dead brother to brew great sake using a forgotten rice strain (called tatsunishiki in the story).  If that doesn’t sound corny enough, they even made it into a twelve part TV drama series. If you haven’t seen it, don’t worry you didn’t miss much. Pretty much the same formula as every Japanese drama series: main character has a dream that everyone around them says is impossible, main character struggles, cries a lot and almost gives up but comes through in the end, awkwardly kisses the obligatory love interest and all the doubters admit they were wrong to ever question the human spirit-*yawn*

Of course every time someone comes up with something “original”, there’s always another who says they came up with it first. This story is no exception…..
Up in Yamagata Prefecture a brewery by the name of Koikawa claims they were growing Kame no O in 1979. Because the source for their Kame no O seedlings were also different, they of course claim their Kame no O is the true Kame no O, and of course Kusumi disagrees. Me? I dunno, as long everyone’s making good sake I don’t really care.

Unfortunately I don’t have the famous Daiginjo, but I do have a bottle of Kiyoizumi

Tokubetsu Junmai made with Kame no O. Not an overly aromatic sake, it gives light aromas of white flowers and vanilla. Very low in acid and a somewhat slick mouthfeel helps it slide down a little too easy (as if there is such a thing). Delicate flavours or apple and melon on the palate, it’s a very pretty sake.
Sadly, Kiyoizumi is not available in Australia however, their arch nemesis Koikawa is available online through Sakenet . Get some!