A quick post today singing the praises of one of my favourite restaurants of the moment, Cocotte.
Tucked away in the little shopping centre behind RQ’s Tavern in Robina this cosy little restaurant is starting to turn some heads. By no means a straight up Japanese restaurant, Head Chef/Owner Shunichi Tanabe has created an excellent fusion of East meets West in his menu. The cocotte name refers to a small earthenware pot used in French cooking for casserole type dishes. And naturally enough a few of these cocotte dishes feature on the menu. But the real kicker for me is the tapas menu. About fifteen well thought out dishes, very reasonably priced that showcase fresh seasonal ingredients and a creative flair. A couple of safe Japanese standards make an appearance such as yakitori, okonomiyaki and sashimi. Alongside these are some truly tasty dishes such as my favourite, spanner crab croquet. Crispy

, fragrant coating with lusciously creamy, tender crab on the inside went beautifully with a nice acidic kimoto sake from Daishichi in Fukushima.
Other highlights include the slow-cooked Kurobuta pork belly with apple and fennel salad, possibly the softest pork I’ve ever had.

I’m not usually much of a dessert person but the white sesame and ginger parfait with peach compote and lime syrup was just gorgeous. I can’t wait to try the other desserts.

Atmosphere is very cosy and homely. The open kitchen and the fact that Chef Tanabe’s wife looks over the floor adds to the warm homely vibe. Having said that, the rather small-sized kitchen means it can get rather backed up. I wouldn’t recommend coming with a large group and doing the entrée followed by main style of ordering. A group of four or so and ordering a bunch of stuff to throw in the middle and share is definitely the way to go. It’s quite a nice vibe for a quiet romantic dinner too. An outside garden area offers nice alfresco ambience.
And don’t forget, it’s BYO! That’s right, you can rock up with your favourite bottle (or two) of sake and settle in. You could take wine if you want, but many of these dishes went great with sake. Whatever you take, just make sure you get down there and give it a look. You won’t be disappointed.

There’s more to life than Daiginjo

So we know all the different grades of premium (tokutei meishoushu) sake are essentially based around their seimaibuai (rice milling rate), meaning the more of the outer layers of rice that gets milled away the higher the grade of sake. Just to be sure, the grades are:
Honjozo: 70%
Ginjo/Junmai Ginjo: 60%
Daiginjo/ Junmai Daiginjo: 50%

A couple of things to keep in mind – Although the milling rate for honjozo is 70% it can be any rate for junmai as long as they print it on the label. And remember the figure we are looking at here is the percentage of rice remaining after polishing ie. 70% of the grain of rice is left after milling for a honjozo.
Sitting at the top of the heap is Daiginjo. The oft lauded pride and joy of any sake brewery. Daiginjo usually get the most hands on treatment out of all the sake in a breweries’ portfolio. It is the one the head brewer (toji) watches over like a concerned parent from beginning to end without relinquishing responsibility to anyone else on the brewing team. It is the grade that all the breweries send in for the annual New Sake Competition (zenkoku shinshu kanpyoukai) as the pinnacle of their skill. It’s also the grade of sake that friends always get for me as a souvenir (shouldn’t complain though). Daiginjo are usually aromatic, elegant, soft and complex. Good ones can often manage to be soft and understated while still being packed with flavour and complexity.

But there’s more to life than daiginjo. Sure they’re considered the best but that doesn’t mean there’s no room for other grades. On the contrary, lately I find myself drinking less and less daiginjo and more of the lower grades. Why? Because they’re much more approachable with everyday foods and appropriate for social drinking.
While a daiginjo can be a great match for high-grade sashimi or other light fish dishes, I don’t find myself eating that stuff very often, sadly. A meal of soul-food like yakitori, 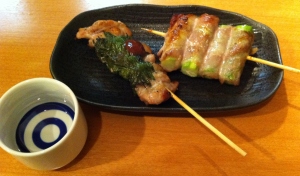 tempura or more rustic dishes calls for something with some down to earth character and this is where honjozo and junmai can fit in nicely. But lets take it up a notch.
You may or may not have seen the word Tokubetsu (特別) tagged on to a label of honjozo or junmai sake. What’s that all about? Tokubetsu means special. In the case of sake, a tokubetsu honjozo or tokubetsu junmai is a sake where they have done a little something special such as used a higher milled rice or higher grade of rice or a different yeast strain to what their usual honjozo or junmai uses. It could be anything, basically, it’s up to the Toji as to what makes it tokubetsu. Lately these are the sake that have been floatin my boat. Reason being, they are great for drinkin! They are interesting enough to pontificate over if that’s your thing but they don’t distract if you’re just sipping on some sake watching the cricket (I’m really not sure if anyone does that) nibbling on o-kaki or some tasty snacks.

The other thing they are great for is when you find yourself in a Japanese restaurant ordering a whole bunch of different dishes to share and you’re not sure what sake to go with it all. In such situations where conversation and food are the hero of the evening, a simple junmai or honjozo (tokubetsu if they have one) is a great move. So there’s no need to feel like a cheap-skate or be swayed by the know-it-all at the table declaring daiginjo is the best, honjozo and good ol’ junmai are nothing to be looked down upon.
There’s tons out there but if you’re out and about, keep an eye out for…
Kikusui Honjozo Karakuchi (dry) from Niigata (seimaibuai 70%) has a refreshingly light aromatic

nose. Slightly floral with hints of melon. Soft on the palate with a definite dry finish. Nice acidity. Soft but not overly feminine. A great honjozo that works wonderfully chilled. An excellent everyday sake. Honestly can’t say I’ve seen it about in restaurants but I know some of Kikusui’s range is here.

Yukino Matsushima Tokubetsu Junmai from Miyagi (seimaibuai 60%) is a good all-rounder. Aromas of vanilla and rice blend with nutty banana. Slight and clean on the palate but with a nice peppery spice at the back. Works nicely slightly warmed too. Available in some Japanese restaurants. Went very well with tonight’s tofu croquettes.

Well, it’s been a while but I’ve just returned from Japan where I was completing the Advanced Certificate of the Sake Education Council’s Sake Professional Course.

A successful trip in that I passed the test, learnt a lot and most importantly drank a lot of good nihonshu. Although, probably my favourite part of the trip was visiting sake breweries of various sizes in varying regions. In Nagano we visited the very well-regarded (and rightfully so) Masumi. Roughly translated to mean “Mirror of Truth”, Masumi is this year seeing in their 350th anniversary-quite a feat. But Masumi is quite deserved of such a rich history. One of the leaders when it comes to solid, well-made sake without being bogged down by tradition, they are probably best known for the development of the No.7 yeast strain. You see, the yeast strains used in sake brewing are all rather unimaginatively numbered rather than named. Some breweries cultivate their own yeast strains but most purchase them directly from the Brewing Society of Japan. In 1946 the brewers at Masumi developed what became known as No.7. Now a very commonly used yeast strain across the country (used by around 60% of Japan’s breweries!). Full of fresh somewhat fruity aromatics it is mostly seen in namazake (unpasteurized), junmai and honjozo. It was also interesting to see Masumi also mill their own rice. These days many breweries outsource the milling process due to brewery space limits and simple time constraints. There are a few companies that are quite adept at milling so it is often easier to get the rice milled before it arrives at the brewery. However, Masumi still does it themselves in a large and rather noisy milling room.
Masumi actually has two breweries. A large main brewery in Fujimi active since 1982, rather beautifully covered in snow and surrounded by Nagano’s gorgeous mountain ranges, and the original brewery in Suwa-much older and smaller but reeking of history.
After being taken through both breweries and treated to an amazing lunch, a comprehensive tasting of Masumi’s products was much appreciated.
A thorough tasting at the end of the tour was much appreciated. All the sake tried was balanced, approachable and brilliant. For a brewery whose mission statement early on was to make the best damn sake in Japan, they’re doing pretty well.

Decorative barrels of sake at the entrance to the brewery

A tank of fermenting sake. The two cannisters are filled with ice and placed in the tank to lower the temperature of the mash as necessary. 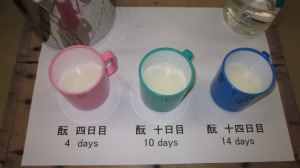 Lucky enough to sample the mash at three different points in the fermentation process. The flavours get quite tangy and tart along with obvious increases in CO2 spritz.

Champagne fans will be familiar. This rack is used for riddling their sparkling sake. The bottles are rotated in the rack to encourage any lees and yeasty bits down to the neck of the bottle. The neck is then frozen and the floaties removed a’la Methode Champenoise. 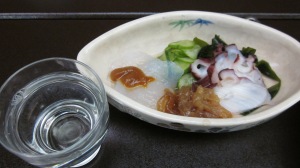 A small sampling of the delicious lunch put on by Masumi.

A glimpse of the beautiful, snow kissed mountains surrounding the brewery.

Masumi is not available retail in Australia as far as I know but is available in a few Japanese restaurants if you look around. It’s worth the search.