Like wineries and beer breweries, not all sake breweries (sakagura) are the same. You’ve got big conglomerates churning out millions of litres of product all year round, medium-sized breweries that make enough to cover Japan and a few exports and tiny ones that only make enough for the locals. What always amazes me though, is how some can appear quite small but still turn out quite a bit of sake. Kozaemon is such a brewery.
Located in Gifu Prefecture in central Japan, Kozaemon has quite a history as a 300 year old brewery founded in 1702. And these days they’re garnering a bit of attention as a forward thinking brewery both in Japan and abroad.

One of the things I love about Kozaemon is they are the kind of brewery that has a go at everything. Some breweries have the portfolio of a few sakes and they brew with little change to the portfolio year in year out. Kozaemon makes (in varying quantities) just about anything you’d care to try. Whether it be using different rice varieties, grades, yeast strains, brewing methods, namazake, aged they seem to find time to have a go at everything. And there’s only a team of three in the brewery! To me, when a brewery spreads their wings and tries different things it shows passion and it’d be fair to say Kozaemon are a passionate brewery. One thing of which they are proud is their relationship with their rice farmers. Many breweries buy sake rice from large co-op’s and have to make do with what they get. Kozaemon have contracted growers all over Japan and know exactly where their rice is coming from and how it is being grown. Of course you can’t get everything they have to offer here in Australia but of all the sake brands available in Australia they have arguably the largest range here thanks to their listing as the “house sake” for the Sake Restaurant group in Sydney, Brisbane and Melbourne. Whether you want to try their daiginjo, junmai, honjozo, yamahai…they’re all there.

Not available retail sadly but if you’re lucky you might find their sake in other restaurants too so keep an eye out.
Kozaemon Junmai Ginjo Bizen Omachi
Seimaibuai: 55%
Rice Variety: Omachi
Upfront ginjo-ka (ginjo-esque aromas) of candied florals with hints of peach and boiled lollies. Quite settled, I’m not sure but I believe this may be slightly matured before release. I find Omachi to be the most easily recognisable rice variety, bearing in mind rice varieties are not as obvious as wine grape varieties. Omachi is often full, and savoury with some chestnut flavours in the finish-just like this guy. A full, opulent sake with moreish umami,  would be a great match to slightly meatier fish dishes. 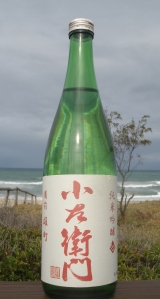