The Cloudy World of Nigori

Ah, I’ve got tons of cheesy titles to head a bit on nigori-zake but sadly they mostly suck.
Okay, anyway so nigori means “cloudy” or “hazy” and in this context it refers to loosely pressed sake that has a cloudy appearance.

Note that cloudy sake is called nigori-zake in Japanese, where the “s” in “sake” becomes a “z”. This is just a pronunciation thing. Try saying “nigorisake”, easier to say”nigorizake” right? Weird huh?

As for what makes it cloudy? This where things get…cloudy. Nigori-zake is often referred to as unfiltered sake. A bit of a misnomer 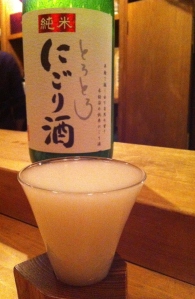 as the cloudiness isn’t from the filtering stage but actually the pressing stage of the sake making process.
With regular sake, after the fermentation process has been completed the mash is pressed with a machine that looks kind of like a giant accordion(called assaku-ki in Japanese). After the sake is pumped in to the machine, rubber balloon type bags are inflated which press the sake up against mesh plates, pumping the sake out and leaving behind all the undissolved rice chunks known as “kasu”. (There are other ways of pressing sake but this is the most common. I’ll leave the others for another day so as not to “cloud” the issue. Ha! Another bad pun).
What this leaves us with is a thick, milky looking sake quite different from the clean, pristine sake we know and love. Obviously, nigori-zake lacks the finesse, fine aromas and delicate mouthfeel of ginjo sake. Quite often they are on the sweet side and sometimes even spritzy or straight-up fizzy.  Of course they are also a lot thicker than refined sake to the point where some are downright chunky. As for where nigori-zake fits in to the sake world; sadly its often thought of as the”gateway” sake for westerners ie. the best way to introduce sake to the uninitiated. Reason being the novelty of the appearance and the sweet flavour profile make it more approachable than other sake. I say sadly because I often feel that thrusting nigori-zake onto the western drinker is a bit condescending as if we aren’t sophisticated enough to “get” refined sake. 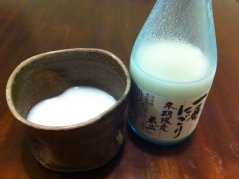 You’ll find in most sake bars in Japan they may have a couple of nigori-zake at the back of the fridge but they aren’t big sellers. On the flip-side most Japanese restaurants in America and increasingly Australia, plough through the stuff.
While nigori-zake has its place,  it certainly isn’t the be-all and end-all of the sake world. By all means check them out if you spot them, if nothing else they offer an interesting window into what the sake of old would have been like before the pressing techniques of today were available. They’re also probably the best foil for spicy food. Usually sake struggles against hot spicy foods but nigori-zake fares better than most.
Another version of nigori that you might spot is usunigori-zake. This is ‘thin’ nigori-zake; pressed a little more than regular nigori and thus not as thick; more hazy than cloudy.