I’m writing today’s post with a bit of a spring in my step. Australia’s sake market is still very young and as such there still isn’t a huge range of sake available here, retail or in restaurants. But the good news is the ones we are getting are of a pretty high standard and you can’t get much higher than Dewazakura from Yamagata prefecture.
Dewazakura is a very popular brewery as shown in its number eight ranking on the popular sake consumer site Sake Monogatari (sake stories) but is also famous for its promotion of the local rice variety Dewasansan.
Firstly, the name. Dewa comes from the name for the Yamagata region used in the 7th century: Dewakuni (Dewa country) and zakura (or sakura) meaning cherry blossom. Dewazakura have been brewing sake since 1892 and are firmly in place as industry leaders. The sake I have today is one of their flagship brews, the Dewazakura Dewasansan Junmai Ginjo Commemorative Nama (once pasteurized).
A bit of a mouthful but an amazing sake. 20 odd years ago the brewers of Yamagata got together and decided they needed to do something to raise the level of Yamagata sake and get it out in the forefront. All sorts of research were undertaken, new yeasts were cultivated, techniques refined. But the big development after eleven years was the birth of Dewasansan rice. Again the name comes from the old regional name of Dewa combined with a bit of word play. Stick with me here….Yamagata is surrounded by lots of mountains of varying heights. 33 of those mountains reach the 1400m height. 33 in Japanese is sanjusan or if you just say 3 twice, sansan. Which is why sometimes you’ll see it written as 出羽33 It’s also a play on the word for “mountainous”, yamayama written as 山々. However due to the unbelievable complications that is the Japanese language that character could also be read as sansan. The discoverers of this rice variety decided they wanted to give the rice a name with a bit of flair so they came up with 燦々 meaning brilliant or bright which also reads as sansan. Giving us,出羽燦々 So, there you have three interpretations of how they got the sansan part of the name. Whether my explanation makes any sense or if it was worth it, I’ll leave up to you.
Since its inception Dewasansan has become the pride of Yamagata with plenty of

breweries picking it up and producing soft elegant brews. The other interesting twist to the Dewasansan story is the creation of a sort of appellation controlee clause decreed by the Yamagata Pure Brewing Inspectors. This stipulates that if a sake is made under the set conditions it may bear the official Dewasansan sticker:
*100% use of Dewasansan
*Must be of Junmai Ginjo level (no added alcohol allowed)
*Rice milling rate must be less than 55%
*Must use yeast and koji of Yamagata origin.
And if you thought they couldn’t take this any more seriously, they even have a theme song. Yessir, a Dewasansan theme song. Click on this link and scroll to the bottom MP3 link to hear it in iTunes. Inspiring stuff.

All of this brings us to Dewazakura’s Junmai Ginjo bearing the approved Dewasansan sticker. As I mentioned at the top of this post I’m in a bit of a good mood because quite honestly I think this is one of the best sake available in Australia. A big call maybe but I’ll stand by it. Being (partly) unpasteurized, it shows those big unrestrained aromas of pear, hints of cocoa, and the nama (unpasteurized) character of white rind cheese. Then take a sip and it seduces your palate entirely. Umami deliciousness, balanced, tight acid and fullness that covers every corner of the mouth. For me this is why I love sake. Dewazakura Dewasansan Junmai Ginjo is out and about in restaurants and maybe a couple of retailers. If you spot it around hope that it’s been stored in the fridge before you fork over your hard-earned because for unpasteurized sake room temperature or even worse, an Australian summer can be detrimental to the sake. Remember, sake has no preservatives so care must be taken with storage. Keeping that in mind, by all means hunt about and if you can’t find it hassle your local bottle-shop or restaurant to get it in, coz if you aren’t a sake fan yet a couple of sips of Dewazakura and you will be. 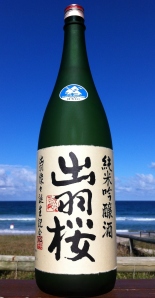