← Change In Direction AKA Farewell!
The Coming of Autumn and the Hiyaoroshi Onslaught! →

If you’ve been anywhere near social media recently and more specifically hanging around sake interested types you would have heard the great news that “The Birth of Sake”, a Kickstarter funded film has achieved it’s donation-funded budget and will be completed for release next year. Why is this great news? Well, it’s the first of its kind for starters. While there are plenty of films and documentaries floating about the place singing the praises of chefs, restaurants and wine, there has never been a mainstream Western-produced documentary on the making of sake and the people behind it. Created by film-maker Erik Shirai, this film takes a look at a Yoshida Shuzo makers of Tedorigawa in Ishikawa prefecture and features not only the fundamental physicality of making sake but also looks at the relationships of the brewery folk and how spending six months of the year together brewing sake shapes the people who make the sake. If the buzz that accompanied the recent Jiro Loves Sushi documentary is anything to go by I think this could be a real door-opener for the uninitiated into the world of sake. As the brewing industry looks more and more to overseas exports, the attention a film like this could bring the whole industry is surely a boon for all.
So on that note I figured I best get out and try me some Tedorigawa sake to see what all the fuss is about. To be honest I have tried Tedorigawa before a couple of years ago but a little revisit never hurts.
Fortunately it wasn’t too hard to pick up a bottle of Tedorigawa Junmai. One sip of this fairly unassuming Junmai though and it’s hard to not get excited about more people knowing about Tedorigawa and their sake. Carrying a fairly high seimaibuai (rice milling rate) of 50% (for the koji rice) and 55% (for the rice added to the mash) I was expecting a lighter perhaps more fragrant style of Junmai but was pleasantly surprised that the full bodied umami wasn’t lost to the high level of milling (Generally, the higher the milling rate the lighter the body and lower the umami). The aromas are definitely of a more stone-fruit driven fragrant, almost Ginjo-esque variety than some of the stoic, muscular Junmai but the way the sake holds its weight alongside the aromas is quite extraordinary. Waay to easy to drink and definitely moreish. Probably better suited to richer types of food but drinks plenty good on its own too. And to top it all off, incredibly reasonably priced for a sake of its calibre at just over Y1000 (around $12AUS).
Sadly, we have to wait until the latter half of next year to see the movie but make some calls, pull some strings, call in favours and get yourself some Tedorigawa sake to tie you over in the meantime. 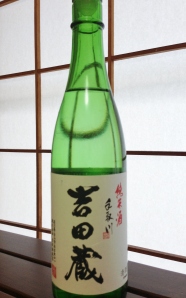 ← Change In Direction AKA Farewell!
The Coming of Autumn and the Hiyaoroshi Onslaught! →